The Royal Afghan is the poolside restaurant at the ITC Windsor Hotel, a beautiful hotel built to look as though it’s been there for at least a century even though it was actually built in 1982. It opens at 7:30 and we got the earliest possible reservation at 8 pm. A

sweet desk clerk walked us through other beautiful restaurants to get to ours where Melissa was greeted by name at the entrance (one benefit of making a reservation). We were led to a table apart from all others, right next to the pool. It was lovely with a nice view of the building and grounds, although the peace was a bit broken by the honking of cars on the other side of the wall.

The waiters were kind and attentive, putting bibs around our necks (for meat-eaters, this 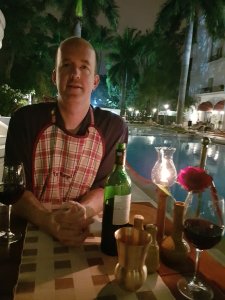 is a barbecue place) and bringing an array of wine bottles for us to consider. They actually had Erath on the wine list, which would have been an obvious choice if it

hadn’t cost $150. Knowing Erath as well as we do, we also knew just how inflated that was and couldn’t bring ourselves to do it. Melissa chose the shiraj sangiovese Vino Della Casa, made by Fratelli, an Indian winery who we think brought in an Italian wine maker. It isn’t necessarily our new favorite, but not bad for Indian wine. They also brought us hand towels and explained that we would be eating with our hands, although they said they could bring silverware if we needed it. We assured them that we would eat the food the way it’s meant to be eaten, which made them happy.

After perusing the menu, we told our waiter what we wanted to eat, and he basically said no. We had neglected to order their signature dish, the Dal Bukhara, a black lentil stew that simmers over charcoal fire for 18 hours, and he was disappointed that we would not be able to taste more things. His solution was to offer half portions of four different

This is an entirely inadequate photo of an amazing meal.

dishes in addition to the dal, paneer makhani, and breads.  It was a magnificent, if overly plentiful, meal. Melissa’s favorite was the Tandoori Phool, roasted spiced cauliflower that is breaded, fried, and then finished on the tandoor. It was amazingly delicious with complex, smoky flavors inside and a nice crispy outside. The Tandoori Simla Mirch was unlike anything we’ve had before, a green pepper stuffed with spiced veggies and cashews, then roasted. So good. The Tandoori Aloo was a peeled, hollowed potato, stuffed with cumin-seasoned potato mashed with cashews and raisins, then roasted in the tandoor so the outside became crispy while the inside stayed soft and flavorful. The Subz Seekh Kabob was probably our least favorite, while still being a very tasty blend of minced, rolled veggies, baked in the tandoor. The Dal Bukhara was just as good as our waiter suggested it would be, and the paneer in a flavorful gravy was quite nice.

At dessert time, we were asked whether we would like an Indian dessert or a chocolate dessert. As good as we’re sure the Indian desserts are, Melissa wanted chocolate for her birthday. A woman came out from the chocolate shop with an iPad to show us the chocolate desserts we could choose. They also gave us a quick primer on the growing chocolate industry in India. Apparently, they are still buying the chocolate itself from Brazil, but there are more and more chocolatiers here. There are also some farmers in Kerala experimenting with growing cocoa.  We selected a gorgeous confection of chocolate mousse on a crispy chocolate cookie, coated in dark chocolate ganache.

It was a perfect birthday dinner.

One thought on “Birthday Dinner at The Royal Afghan”