Leaving India was surreal, not knowing when or whether we’d return, and not really knowing what life will look like when we return to Portland. The transition was greatly eased by our arrival in Armenia, in part because we chose Armenia for the chance to start our dream summer vacation with a friendly face.

Madlene Minassian, Melissa’s friend in LA, had always spoken of her love for Armenia

and her desire to return. When Madlene and her family moved to Armenia and Melissa moved to Portland, they remained connected through Facebook, and Madlene’s photos of her beautiful city and stories of the 2018 Velvet Revolution fueled our desire to visit.

Yerevan, the capitol of Armenia, is a relatively new city with proud ancient roots. It became the capital after WWI when Armenia was divided, with part of its land (the part with the previous capital) becoming part of Turkey and the rest becoming part of the Soviet Union (more on that later). The city’s roots go back to 8th century BC, but the modern city was designed in 1924 by a Russian Armenian. The layout is lovely with many public spaces nestled in the amphitheater shape of the city that rises up the hills surrounding the central core. It feels very European (although that may just be in comparison to India) with countless fountains where people congregate when they aren’t sitting in adorable sidewalk cafes or secret garden wine bars and restaurants. It’s a quiet city in the morning and an effervescent city at night. We loved wandering around, admiring the flowers everywhere, the ice cream shops on every corner, and the stunning buildings constructed from tufa, a colorful Armenian limestone. We also enjoyed the stories and tasty brandy at the Noy brandy factory.

We made a few very good choices, mostly thanks to Madlene and her family. They spent a day showing off the city they love, including Vernissage, an amazing market of everything from traditional crafts to Soviet-era antiques to rugs from every region surrounding Armenia. They even took us on our first Metro ride to the train station to buy our tickets for our trip to Tbilisi a few days later. While there, Madlene showed us around an old Soviet train union building a friend of hers is rehabbing into co-working space, a cafe, and a general gathering place. The bulk of the day was spent at their summer home in Garni, a village just outside of Yerevan, that had belonged to the family of her husband, Arthur Ispiryan, for many generations.

Wandering around the city with Arthur was a thing. He is a celebrity on many different levels. He is a renowned jazz vocalist but was blacklisted when he started speaking out against the Armenian government that had taken on the characteristics of the Soviet system that most of Armenia was pleased to shed. After the entirely peaceful revolution of 2018, Arthur was elected to the city council on the ticket of the new political alliance that is working hard to make the country more democratic, more transparent, and less corrupt. Wandering with him means some people murmur and point at the rock star while others approach to shake his hand and give him a “God bless you.” Most amusingly, Arthur is frequently besieged by constituents who want him to know about the people in their lives who still live by the old rules. This is where you can see the kind of person Arthur is. He listens patiently, empathizes with their plight, and speaks softly. For being such a celebrity, he is also humble to the point of being shy and soft spoken in a way that forces people to listen. 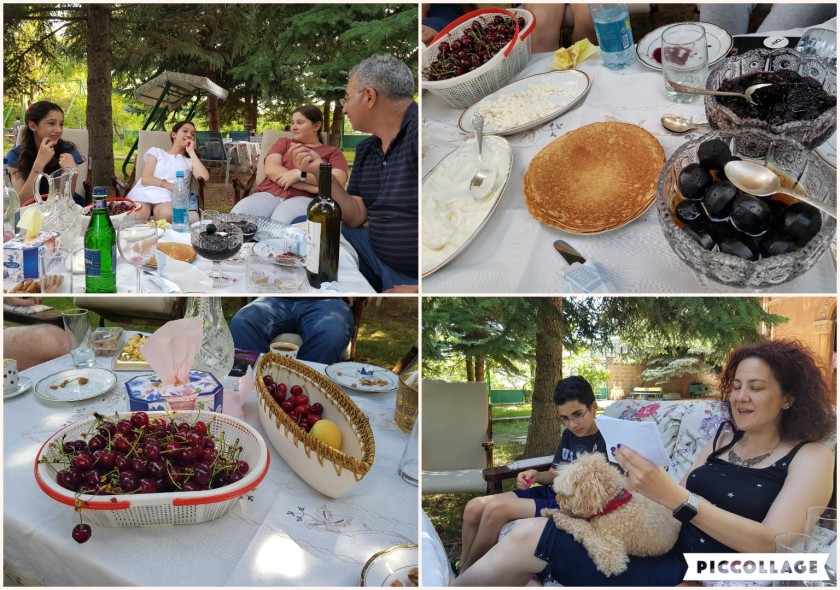 He and Madlene and Arthur’s mom are also incredible hosts. Two other families were visiting from LA, so they threw all of us a wonderful party at the summer house in Garni where Arthur’s mother lives full time during the summer.  We ate apricots from nearby trees, three kinds of cherries from their trees and those next door, and drank rose juice that Arthur’s mom makes from the roses in the yard. After some time relaxing in the yard, we visited Geghard, a 4th century monastery carved from the cliffs. Being with Arthur meant an amazing treat – a quartet was there for another event, but wanted to sing for him in the cave room known for its amazing acoustics. It was impossible not to tear up while witnessing such beauty. After a return to the summer house for a fabulous dinner, we visited Garni, a 4000 year old Hellenistic temple. When Armenia became Christian in the 4th century, all of the old pagan temples were destroyed and churches were built in their place with the exception of this temple at Garni because the local princess asked to keep it as a summer residence. It was a powerful sight even visiting in the dark. The Armenians with us were all awe-struck and filled with pride for their heritage. 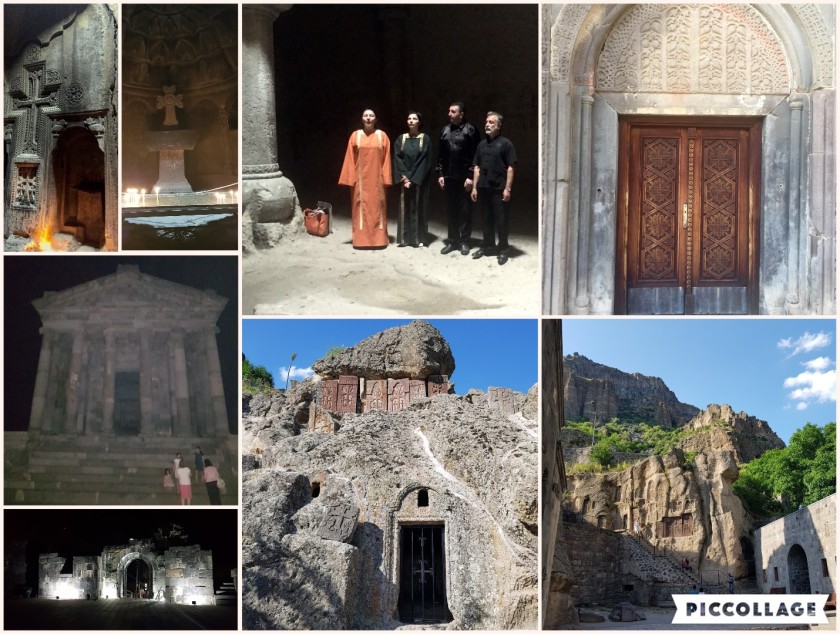 This connection that Armenians across the diaspora feel for Armenia is amazing. Of the 10 million Armenians in the world, only 3 million of them live in Armenia. The rest were dispersed by the search for a better life, by the horrific brutality of the Armenian genocide, and by the deadly 1988 Gyumri earthquake. The adults who have lived most if not all of their lives outside of Armenia talk of buying homes and returning. The adolescents who were visiting for 3 weeks talked of their sadness at the prospect of leaving and hopes to return soon, perhaps to stay.

We were joined by more diaspora Armenians on our big tour day. The 14 hour tour included a lot of bus time interspersed with incredible sights. We saw the beautiful Shaki Waterfall, the 9th century Tatev Monastery with an even more ancient 5th century church on the grounds, the incredible views from the Wings of Tatev (the longest reversible cable car in the world), and Karahunj (Armenia’s 6,000 year old Stonehenge). We tasted wine in the region where folks recently discovered an ancient winery, also 6,00 years old. Throughout the day, we were treated to views of the beautiful scenery of Armenia – high desert, dense forest, towering mountains, and wildflowers everywhere. It was a long and delightful day.

On our last day, we visited Tsitsernakaberd, the Armenian Genocide Memorial Complex which was built in 1967 in response to Armenia’s agitation with their Soviet overlords.  The memorial is truly moving, bringing many visitors to tears. In 1995, a museum was added which powerfully tells the story of Turkey’s incredibly brutal efforts to completely eliminate the Armenian people. Turkey seized the chaos of WWI to advance their plan, only stopped by the end of the war and Russian intervention. With a powerful need for protection in their vastly weakened state, they agreed to join the Soviet Union which dominated life there for the next 70 years. The photos were painful and the facts even more so. 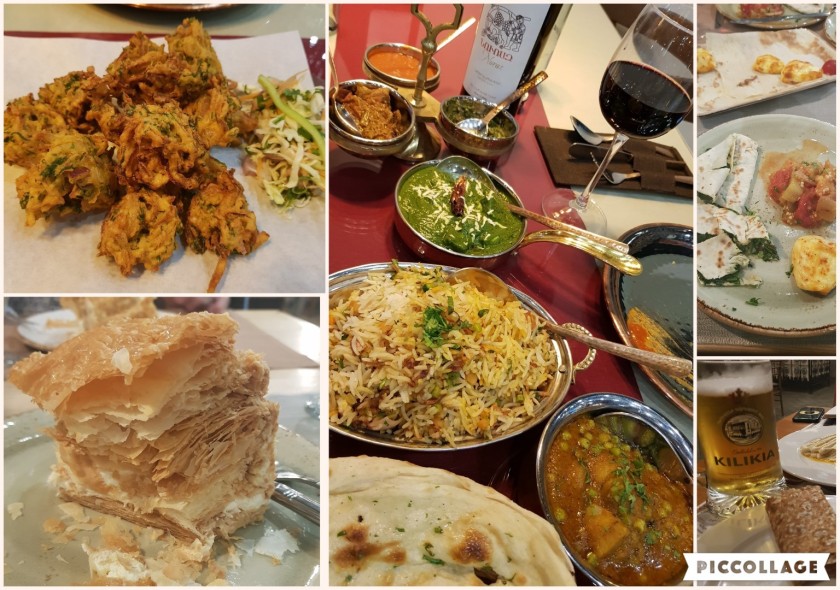 Along the way, we had all kinds of good food, including traditional Armenian at Lavash and snacks at sidewalk cafes that line the streets and parks. We also celebrated Melissa’s mom’s birthday at India Mehak, our first Indian food in nearly a week! It is such a beautiful city, we mostly just enjoyed walking around gaping at the various styles of buildings, old Armenian, Soviet, and modern. Madlene confirmed what we had noticed about the streets of Yerevan, that they are really safe. Adolescent children, including her adorable sons David and Shahen, roam freely without a worry, and have done so since they were 9 years old.

We left Armenia so aware of all the things we didn’t get to do, but so grateful for the things we did. This beautiful, charming, welcoming city is one we can easily imagine living in, and would certainly love to visit again.