This weekend, we got thoroughly out of our comfortable rut and participated in something new and crazy: The Bengaluru Service Jam. Bengaluru was one of over 80 cities around the world forming teams to spend an intense weekend exploring big issues using a design-based approach. Nope, we had no idea what that meant, either. We also had no idea how many people would attend, how old they’d be, or what kind of problems we’d tackle. Melissa thought, “Ooo. We’ll be improving social services in Bangalore.” Tom thought, “I’ve been saying that we need to do something new and exciting on the weekends; it’s about time I powered through my ennui.” It’s probably for the best that we knew nothing – with a little more knowledge, we might have skipped it and really missed out on a fascinating experience.

It turns out that a “Service Jam” is a bonzai event, where in 48 hours the group identifies 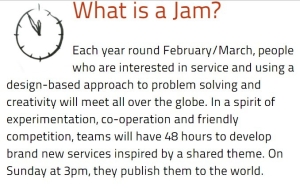 a need and designs a service to address that need. Many of the participants, especially the organizers and facilitators, were specialists in service design, a particular type of design focusing on designing not necessarily products to fill the need, but an entire service experience. The idea is to anticipate the many touchpoints where our clients would come in contact with our service and make sure that everything happens with an eye on fulfilling the objective.

We ended up in separate groups addressing the same question: How might we teach the masses about consent? We got to spend the whole weekend talking to some really smart and interesting people about a topic that we both are passionate about. We learned a lot about the realities of the issues of sexual consent, sexual assault, and all kinds of related issues here in India, beyond the assumptions in the headlines. For example, did you know that people will actually adjust a woman’s bra strap “for her” if it is showing? NEITHER DID WE!

Melissa was in a group, The Scary Heroic Rollercoasters, with a diverse group of people

with vastly differing ideas about what “consent” was referring to, from sexual consent to wedding consent to intellectual properties consent. After an at times touchy process to come to consensus, including the intellectual properties voice dropping out, The Scary Heroic Rollercoasters finally came to focus on sexual assault and designed an app that would help a woman (or man, in rare cases) deal with the moment of assault, from call for help from others in the bar, to locating counselling, to calling the police. 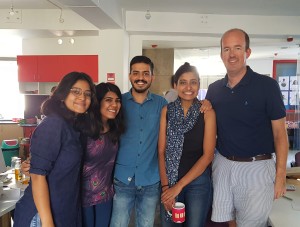 consent refers to then focused on a single aspect, Tom’s group, The Pill Hard to Swallow, kind of went the opposite direction. They started out focused on sexual consent on Friday evening, but then on Saturday morning decided that one of the problems is that the answer “no” means nothing in India, whether it’s a sexual context or at a meal with friends. The Pill Hard to Swallow ended up designing a card game not unlike Apples to Apples or Cards Against Humanity, matching people to aggressor behaviors. Players decide how to react to those behaviors then wrote possible consequences for that response. The idea was to help people add various was to say “no” to their vocabulary and to start training people to take “no” for an answer.

The process to get there was at times super fun and super scary. We played chaotic

games to narrow the topics, stepped back frequently to make sure we were asking the right questions, and we even went out on the street to test our questions on random people. By the end, we were

able to put together presentations that were shared in the group and uploaded to the Global Service Jam’s website (though we’re having a hard time finding it – we’ll share that link if we ever locate it).

The organizers and facilitators were great. The folks running the Jam were smart, enthusiastic women who continually challenged us to stop acting and do something. That was their big idea – do it first, test it, and then figure out what the results of those tests mean. It was hard for both of us, since we’re thinkers first and doers second, but it was fun. It forced us to put aside our need to think through every possible outcome and how to account for it. We did something, then adjusted based on what actually came out of it.

After a very full weekend from 6pm Friday until 5pm on Sunday (with breaks to go home and sleep), we were exhausted, but pretty proud of ourselves. There are so many exciting things to do in this city – we need to keep getting out there to do new things!

2 thoughts on “The Bengaluru Service Jam”