After a long couple of weeks of nearly constant travel, we were ready to set up camp for

a few days on the Southwestern coast of Sri Lanka. A four hour drive from Kandy took us to Hikkaduwa where we met our Airbnb host Nissanka and settled in to our home for a few days.

Hikkaduwa is a cute little town. It is definitely set up to cater to tourists, but that was ok for our last little stretch. Our goals while here were to find some of the traditional Sri Lankan food we’d only nibbled around; to sit on the beach and swim in the Indian Ocean; visit Galle, a town to the Southeast; and just relax. We did all of those things.

Our food experience in Hikkaduwa was one of extremes: unbelievably delicious or maddeningly frustrating. The frustrating came at Mama’s, where the food was disappointing enough to not overcome the pretty lousy service and an incredibly loud live band. The frustration was slightly alleviated by the fact that the beach was feet from where we ate, but it was a meal we were ready to forget. We were also disappointed to not have the chance to cook our own meals at our Airbnb. It was a beautiful home that provided a fabulous few days, but the air conditioners and fans were insufficient to overcome the heat anywhere but in the bedrooms. It didn’t make us super excited to cook a lot of food and add to the heat. We settled for eggs and fresh mangoes and pineapple for breakfast and more fresh fruit cocktails from our resident mixologist Laurence. Not too shabby, we realize, but we had also hoped to cook at home one night.

Happy on the terrace

Purple-faced langur – really big and grunts like a gorilla!

The unbelievably delicious came in a number of places. For lunches, we hunted down the best rated versions we could find of some of the Sri Lankan food we had read about and had nibbles of in other places. We found the Sri Lankan version of roti at No.1 Roti Restaurant (that’s the name, not descriptor) on the main drag in Hikkaduwa. Sri Lankan roti is really a folded roti (flatbread) wrapped around delicious fillings and then grilled. They come in sweet and savory, and they are delicious. In the Galle Fort neighborhood of Galle we found Hula Hula Cafe for Kottu. Kottu is a sort of a hash made with chopped up paratha, spices, and whatever else you choose to put in there: veggies, cheese, egg, meats. We loved it.

fact that it was our only dinner not on the beach. It was a tiny all veg restaurant (sorry, Laurence, though he didn’t seem to suffer), with about eight tables and a set menu. We quickly learned that the set menu was because it is basically home cooking. A kind woman and a small staff cook a few dishes: some dal,  a ubiquitous caramelized onion and eggplant dish, a curry made with jackfruit, pineapple curry (Tom’s favorite), and other dishes. It took us back to our meals at Mohan and Jagu’s place in Bokkapuram on our first stop, where Jagu and her helpers made for us meal after meal of amazing home cooking. If you’re ever on the Southwestern Sri Lankan coast, this is a must, whether you’re veg or otherwise. But be advised — stop by and make a reservation first. We watched family after family get turned away.

We wanted the final dinner of our vacation as a quartet to be special. Nissanka and a couple of others had recommended Refresh to us. Our first evening in Hikkaduwa we tried to go there, but we were unsatisfied with our table. It’s billed as a beach restaurant, and while we could hear the ocean out there somewhere, we were seated at a table on the other end of the very long and skinny dining area, two sections away from the ocean itself. We talked to the manager and were able to reserve one of the few tables right on the beach. We decided to make that our special culminating dinner. We were not disappointed. The food was very good, not great, as was so much of our food in Sri Lanka. Most notably, the deviled cashew curry was delightful. Cashews in a spicy cashew gravy. What can go wrong? We had seen this “deviled” label on a lot of food, and we think it has something to do with the spice mix. Regardless, what made Refresh so super special was sitting there watching the waves lap up on the shore, feeling like we were some of the few people in an otherwise very busy restaurant. It was lovely. As ever, the rhythms of ocean waves have a way of melting away any stress or worry or sadness over the impending end of a vacation. What a perfect end. 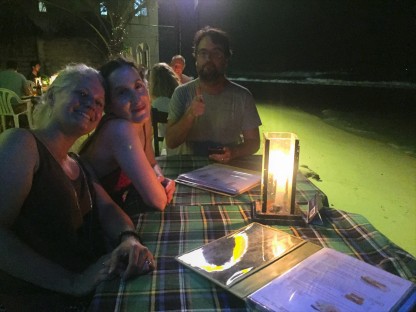 As for adventures in Hikkaduwa, while the main goal was rest and recharging for the return to work (for Tom), we did have a couple of interesting days. One day we went to Galle Fort, which dates back to the 16th century Portuguese colonists and fortified by the 17th century Dutch colonists. Now it is a cute, hip neighborhood with all kinds of shops and restaurants in super old buildings surrounded by a well-preserved protective wall. We had notions that it would be fun to come here, which were confirmed by our fabulous cousins Jim, Kristin, Sienna, Willow, and Kai Devoe-Talluto the week before our vacation, but when they told us they had had gelato at Isle of Gelato worthy of any they had enjoyed in Italy, it became a priority. Mmm. Gelato. To add to the charm of a charming town, Nissanka, our Airbnb host, was so generous of his time to drive us to Galle, about a half hour drive, and home again. He also took us on a little tour of the town that had us wanting to come back for more. It felt more like a town of Sri Lankans than Hikkaduwa, a town of tourists.

Our other priority was swimming in the Indian Ocean. Rachel scoped out the rarest commodity on the beach — a free bit of shade. We set up camp and took turns swimming in the warm, delightful sea. It was relaxing, rejuvenating, and amazing. We simply love the ocean. Looking out at the water, head to the left, take a left, then take a right — you’re in Seattle (the Canal and Portland get a little more complicated).

The last morning in Hikkaduwa meant time to pack up. We bid farewell to Rachel and Laurence at the Colombo airport and spent one last night just the two of us back in Colombo. It was a wonderful end to a vacation that exceeded our lofty hopes.