It would be difficult to come up with two more contrasting cities in India than Puducherry and Tiruvannamalai, and it was a little bit of a culture shock moving between the two. While we may have had moments of missing the cushiness of Puducherry, we were really glad that we made the trip inland.

On the way there, we stopped at Gingee, an incredible ancient fort at the top of a mountain. Started in the 9th century and greatly expanded in the 13th century, it was then seemingly conquered and possessed by every ruling power including the Brits. As we climbed the long, long stairs to the top of the hill, it was hard to imagine invading this fort, but clearly it was possible. At the top, many of the structures still stand, from granaries to meeting rooms to a temple and a mosque. The whole thing was awe-inspiring with the gorgeous vistas around us. 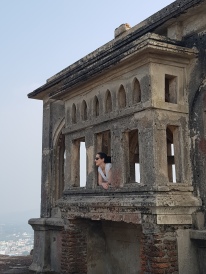 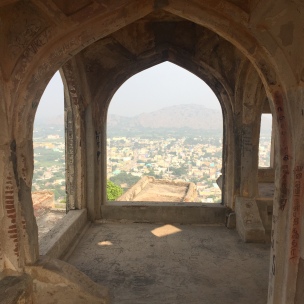 After climbing to the top of the one of the two hills, our driver suggested that we go to a small temple at the base of the other. We were tired and a bit reluctant, but agreed to go along. As we walked up, feeling a bit uncomfortable and unsure of what to do, an orange-clad, bearded priest started waving us over. Melissa immediately followed with Rachel and Laurence not far behind. The priest and his wife spoke almost no English but were determined that we should see and appreciate everything this small cave temple had to share, from its ornately decorated pillars to the sacred cave drawings farther inside. It was a remarkable experience that culminated with the priest refusing money and instead insisting on giving us a gift of an orange shawl and asking us to take his picture (which we happily did). 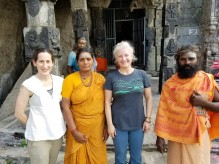 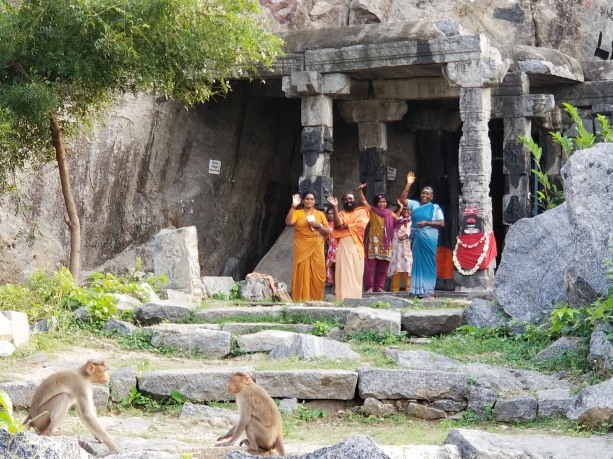 Then we were on to Tiruvannamalai! This ancient temple town is most famous for its annual festival when a fire is lit at the 1200-year-old temple at the base of the hill in the center of town, triggering another fire at the top of the hill, inspiring 3 million pilgrims to sprint up the hill to make offerings to the fire. This fire is supposed to represent the lingam of Shiva, a symbol of the procreation of the human race and Shiva’s dominance over the other gods. Apparently this fire ritual has occured in the town for the last 4,000 years and pre-dates Hinduism.

The main activities of this town are visiting the old, beautiful temple (one of the largest temple complexes in India) and walking the 14 km path around the mountain. We did both. At the temple, we admired the ornate stone carvings done so long ago, watched the temple elephant blessing people (or, in Rachel’s words, “bonking them on the head”), and saw children preparing for the priesthood.

We then headed out for the walk that was on more of a road than a path. We were in good company with many others walking around the circuit, perhaps due to the nearness to the full moon. Every 100 meters or so, there was a temple or shrine where pilgrims were making offerings. Most of these were focused on the Shiva lingam, but a few featured Shiva and Parvati in their half-male/half-female form, or Ganesh, their elephant-headed son. In between the shrines were ashrams, one after another. This is a town that draws lots of westerners in search of enlightenment while still maintaining its Indian, non-touristy character. Even more plentiful than the ashrams and shrines were the orange-clad elders sitting or lying on the sidewalks. These are sanyasis who have renounced their worldly belongings and survive on the offerings of others, completely devoted to Shiva. Most of them were painfully thin and quite elderly. We understand that there are some charitable organizations in town that try to take care of them, but it must be a daunting task.

The way we understand it, there are a number of gurus in Tiruvannamlai, not just in the countless ashrams, but sitting in meditation on the mountain. Apparently, people make a pilgrimage up the hill to sit with their guru. We assume this is where the guru-on-a-mountain stereotype comes from. It’s always a bit unnerving when something you assume is a silly, made up western stereotype about these Eastern cultures actually comes from a nugget of truth.

Tiruvannamalai is primarily vegetarian and alcohol-free. On our second night there, we thought we’d explore something else, so Melissa found a restaurant with reviews that touted its rooftop deck, non-veg cuisine, and bar. Strangely, they were baffled by our suggestion that we’d like to sit on the rooftop and took us to their dark, dingy bar where they had various liquors but no cocktails. We noted that we could order rum and Coke separately to create our own collegiate-style cocktails and asked if there were anywhere outside to sit. The young men who worked there were desperate to please us and led us to their garden which turned out to be lovely. Laurence was able to eat non-veg, and we were all reasonably happy (at least until Rachel’s stomach rejected the meal, but that too is part of the India experience). 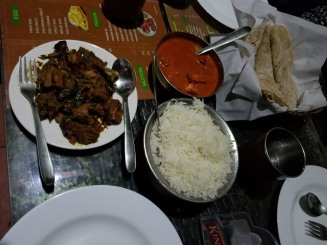 In retrospect, Rachel was not pleased with the experience of Tiruvannamalai, but the rest of us were glad we went to see another side of India. Next, though, we drove early in the morning to the airport in Chennai for our flight for our next big leg of the trip. Sri Lanka, here we come!

Together: Becoming, by Michelle Obama