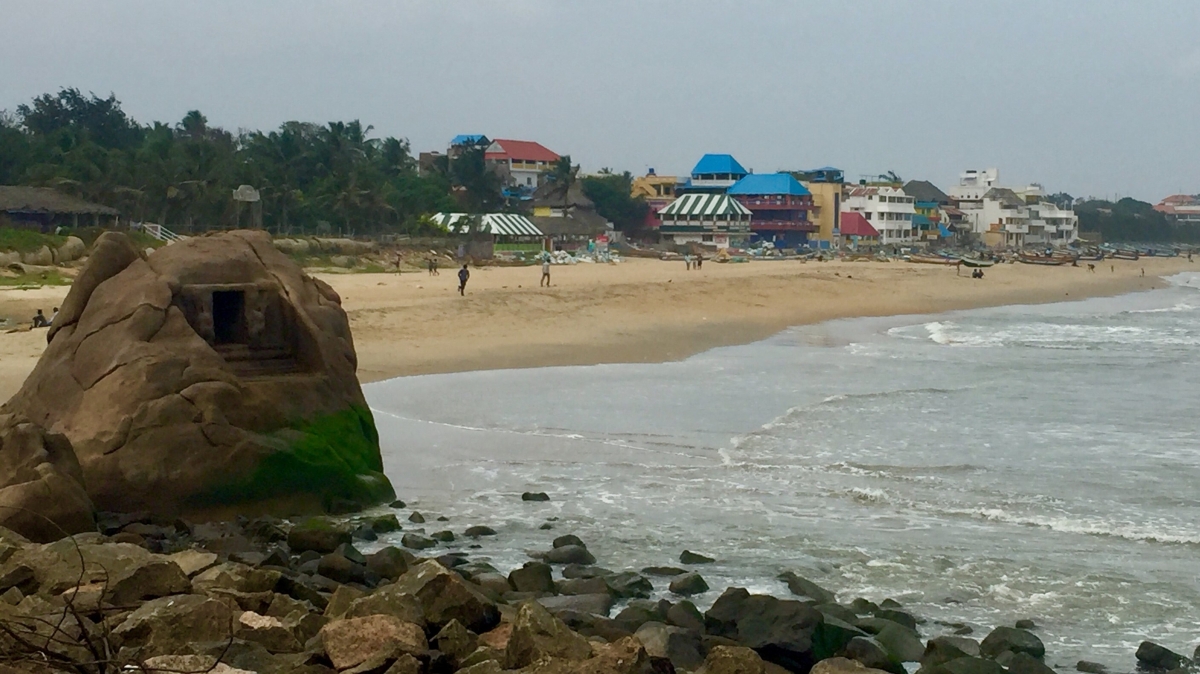 After the inland adventures in Bokkapuram and Mysuru, it was time to head to the Tamil Nadu coast and the sleepy, backpacker town of Mahabalipuram (also known as Mamallapuram). The town specializes in two things: fresh, daily caught fish, and ancient stone carvings. Rachel, one of our travelling partners, took advantage of the fish. We all took advantage of the antiquities. 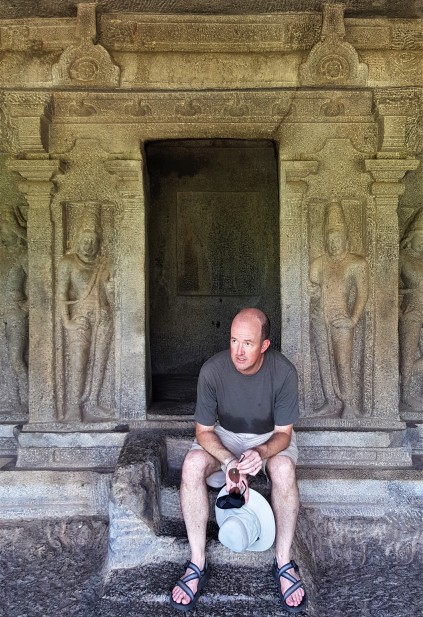 Tom was under the weather but persisted 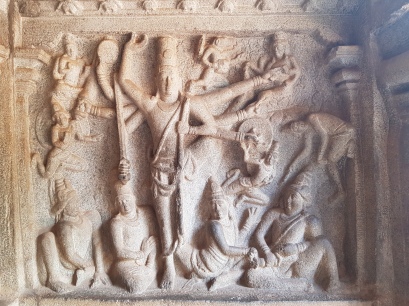 A cool carving in one of the walls. 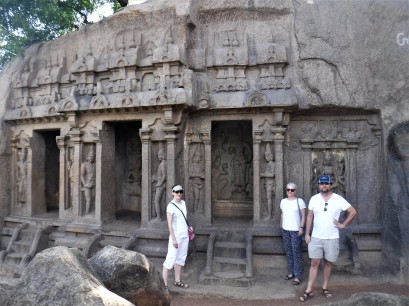 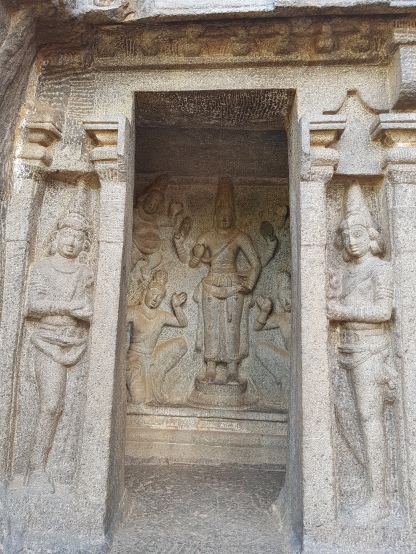 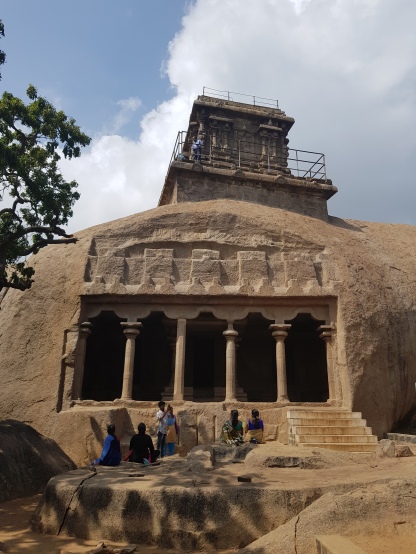 One of the cave temples

A few blocks off the beach, a park run by the Indian Archaeological Society protects a huge granite outcropping with over a dozen bas relief stone carvings. Ostensibly, they were built as temples. Melissa read, however, that they were really an opportunity for the stone artisans of the time to show off their prodigious skills. And prodigious they were. On the macro level, they carved large chambers from solid granite. That is impressive enough. But then the micro level is just as impressive. The details in these carvings are incredible. The ceilings, pillars, and spaces surrounding the inner sanctum are all intricately decorated. The larger carvings on the walls clearly tell stories that made us wish that we’d hired one of the eager guides at the entrance to interpret them for us. We could fabricate stories based on the tiny bit we know about the stories of the Hindu deities, but it might have been more interesting to discover the actual stories. 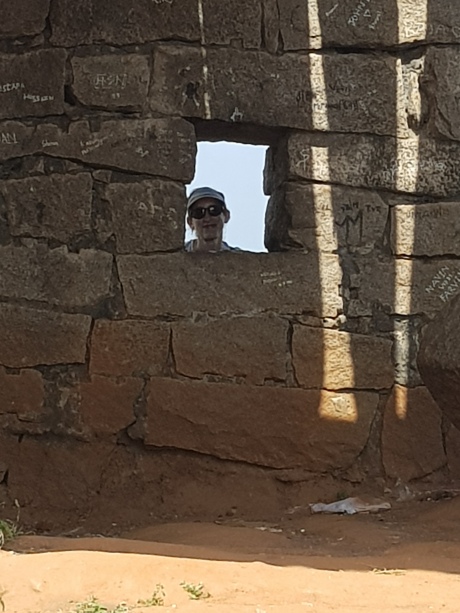 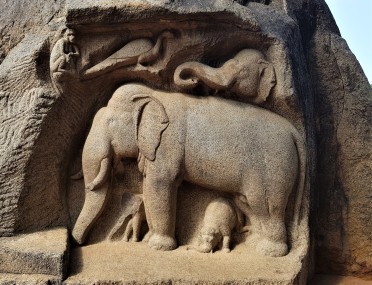 The first bas relief carving we came across. 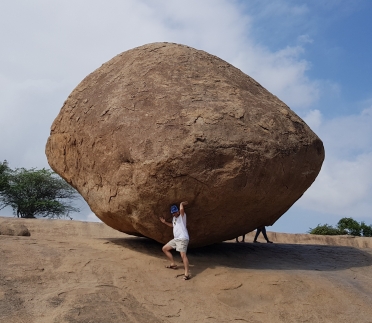 The park itself is a nice sanctuary. It is a quiet, clean, pleasant stroll. There were a lot of other people there appreciating the carvings with various levels of enthusiasm, but we hoped for nothing else. These things deserve to be appreciated. We were also fascinated by the walk and finding along the way small carvings in the granite that were clearly weather worn bits of practice that anywhere else would have been the center of attention. There are also several unfinished caves, abandoned at various depths, with pillow-like carvings where they were clearly preparing to create the void that would one day become a temple/vanity project. 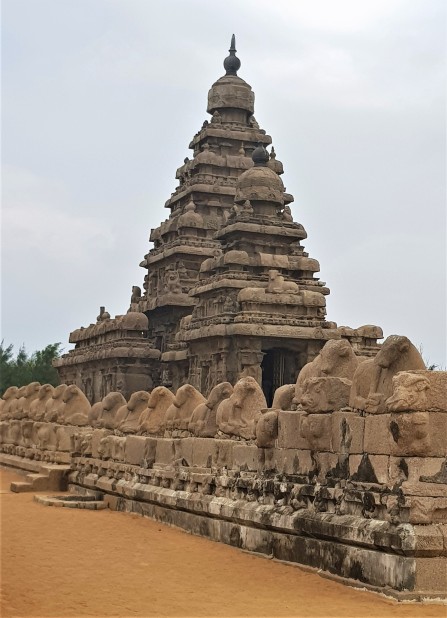 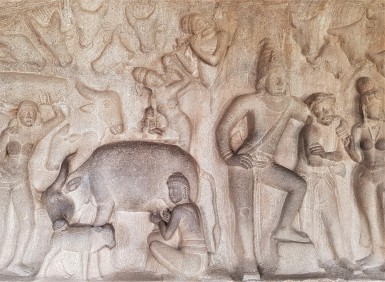 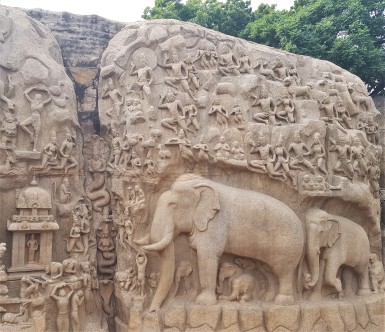 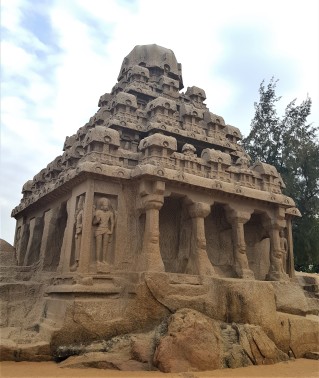 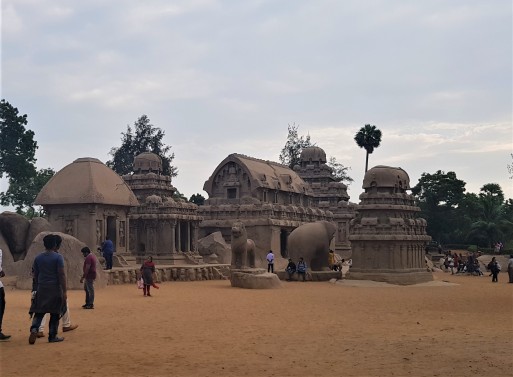 Melissa and Rachel explored the Shore Temple, the Five Rathas, and Arjuna’s Penance while Tom continued to nurse his cold and Laurence opted for a break from the heat.  While a bit weathered by the ocean breezes, the 8th century Shore Temple is still truly impressive. It is now primarily a tourist site but does still have an active temple with devoted visitors at its core. The 7th century Five Rathas (or Pancha Rathas) are actually in better condition thanks to their inland location. They are apparently shaped like chariots, but we couldn’t quite see that. They look like incredibly ornate little houses to us. Arjuna’s Penance depicts the story of Arjuna’s austerities to earn Shiva’s weapon for his ultimate battle. It is strikingly beautiful. We were even more impressed, though, by the smaller unfinished cave temples right next to it that seemed to depict normal activities like milking a cow and carrying a child.

Walking between these various monuments, you pass present day stone carvers. Sometimes you just see wares for sale, larger than life and small enough to put in your pocket. Other times you see people sitting and carving beautiful works right there on the sidewalk. It’s easy to imagine that these are the descendants of the stone carvers who built these monuments 1,000+ years ago.

Mahabalipuram is not intended to be a foodie paradise, and we struggled to find truly exceptional food. We all agreed: most of it was good, not great. Dinners were all about the view (and the seafood). The first night we ate at Bambino’s, where Rachel took advantage of what Mahabalipuram really specializes in: fresh seafood. She had prawns caught that day. Most notably, though, the rooftop restaurant had a beautiful view of the beach and the Bay of Bengal. The second night we ate at the Sea Shore Garden Restaurant, just down an alley from our guesthouse. Again, it was good enough. But

mostly, it was right on the beach. Laurence was amused by his interactions with the wait staff at both dinners, about what Chettinadu means — we now think it is a region of a district of Tamil Nadu — and what Chicken 65 is — we now know it is a breading and frying process, not just for chicken, invented in 1965 (these links are probably only accessible if you are one of our facebook friends). We had two meals, a lunch and a dinner, at Golden Palate. These were quite a bit tastier and a little bit off of the main tourist area, though at a hotel. The breakfast at our guesthouse was forgettable except for one amazing detail. We all ordered pineapple juice from the menu, but were told that we could only have watermelon juice. Two people at the table actively dislike watermelon so declined, at which point we were told that we could order pineapple juice after all. Seconds later, we saw the the proprietor race out of the restaurant, hop on his motorbike, and speed away, only to return moments later with two whole pineapples that soon became very fresh and tasty juice.

Speaking of the guesthouse, we definitely got what we paid for at about $15 per night. We set out on this vacation to have the variety of experiences that India has to offer. Sure, it would be glorious to always stay in luxury, but we also wanted to stay in more authentically Indian (and Lankan) places, too. Guesthouses are usually simple, amenity-free, and run by charming hosts in great locations. This one was all of those things. We had a bed and (bonus!) A/C. The little table and chairs outside our rooms were perfect for chatting about the day to come. And it did not inspire any desire to spend the day lounging about the hotel — we were ready to get out and explore.

We enjoyed our stay in Mahabalipuram, but we were pretty sure bigger things were in store in Puducherry.