Mysore Palace is a must visit while in town. We knew the crowds would be difficult, but hoped that waiting until Monday morning to go would make it a bit easier. We’d learned the day before that our Gold Cards were no longer any use, but also knew it would be worth the price of admission. The palace opens at 10, so we got there a little before and were amazed to see that there weren’t as many people waiting as anticipated. Kainath, our tour guide from Friday night, had told us we’d have the place to ourselves on Monday morning and we wondered if that might feel true. It didn’t.

There was a bit of a crush to get in. There’s no such thing as an orderly line here ever – everyone just pushes their bodies into the available space, no matter that you’re all just trying to get through the same archway and it would be no slower to walk through it without pushing. Once through, we saw that there really were quite a few people there and decided to try to go quickly to the tour of the inside of the palace, then take our time with the exterior. As is so often the case, we couldn’t wear our shoes inside and had to check them, which turned out to be a bit of a nightmare.

The shoe check was a 30 foot counter with two men behind it. The first section was for getting a numbered shoe bag, which we missed as we tried to make our way into the line for shoe drop. Keep in mind that there is no such thing as an orderly line so people are constantly running up and pushing themselves into tiny spaces at the counter, rather than waiting their turn. Also, keep in mind that there are only two men there to deal with over 100 people trying to drop off shoes. Happily, a woman noticed our lack of shoe bag and handed us one she didn’t need. Tom pushed forward while Melissa moved out of the crush to wait. During Tom’s 15 minutes standing at the counter, he was pushed, ignored, and witnessed an argument between the two men working there that brought the little progress they were making to a complete stop. Melissa spent that time fending off a group of 20-something  men who were desperate for photos and finally just started photographing her until she walked away trying not to draw a crowd.

With that bit of trauma behind us, we entered the palace. While much of the palace is not open for viewing, what was open was incredible. Every single inch of the palace is carved, painted, and decorated, from the floor to the ceiling. It was awe-inspiring. And it was a little frustrating to be constantly moved along by the hundreds of other visitors, but in every room we wanted to, we found some space to take it in.

After leaving the palace and going through the stress of retrieving our shoes, our intention was to find some outdoor spaces that everyone else wasn’t crowding into. But we were thoroughly distracted by the camel and elephant rides, just like everyone else. We didn’t go on a ride, but really enjoyed watching. 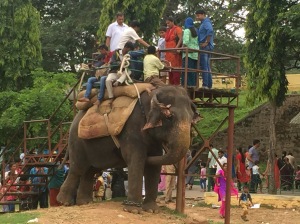 We then headed off to admire the beautiful grounds and discovered the elephant area! All of the elephants from the parade and a bunch more besides were clustered in a section of the grounds, some getting baths, some walking with their mahouts, and many more standing in place enjoying a meal. It was a bit sad to see the stationary elephants chained and made us more excited about the chance to see them in their native habitats at some point. It was also a bit troubling to see the hastily constructed, windowless, metal buildings that house the elephant keepers and their families. We can’t imagine how hot it must be in there, which probably explained why everyone was out and about, with kids running everywhere.

The grounds and temple were lovely, but marred by all of the structures built for the previous day’s festivities. For that reason, and because of a desire to experience it all without crowds, we will definitely be returning to Mysore and its lovely palace.

One thought on “Mysore Palace (and elephants!)”