After nearly three weeks in Bengaluru, we were ready to do a little exploring out of town. We wanted to breathe some cleaner air, see some beautiful vistas, and maybe be in an area with slightly less human density. We were also eager to check out Grover Zampa Vineyards and see if Indian wine was worth further exploration. Sadly, GZ will have to wait since we learned that the winery is closed until September, but all other things seemed possible.

We put out the call to Tom’s colleagues to see if anyone else wanted to come along on our excursion, and happily we were joined by two families: Colleen and Ethan, originally from Lopez Island, but most recently from Cameroon, with their 9-year-old daughter and 11-year-old son; and Ben and Christina from Denver, also on their first international placement, with their 10-year-old daughter and 8-year-old son.

Since the winery idea fell through, we invited everyone to join us back at our place for snacks and some blind tasting of a few Indian wines after the day of sightseeing. Planning for this was a bit of a challenge for Melissa. We love entertaining, but realize now that we have some pretty comfortable entertaining ruts that just don’t work here. The cheeses, dips, crackers, etc. that we expect to easily acquire at New Seasons just aren’t available. The more complicated things we enjoy serving require fancy, new-fangled kitchen equipment like ovens and food processors or inaccessible ingredients. With stops at two stores and an order placed at Nature’s Basket (the place to find fancy imported foods at a serious premium), we had enough random munchies that people wouldn’t be hungry, and we planned to make our first papad and onion bajjis.

On Saturday morning, we were picked up by three taxis arranged by Madesh and drove north for the first time since our arrival. We live in the north part of Bengaluru so are usually traveling south to get to anything – shopping, parks, entertainment. But to the north are the Nandi Hills and Tipu Fort, our primary destination for the day. It took about 75 minutes to get there, thankfully a drive with relatively light traffic, passing a lot of really interesting scenery that included green, jungle foliage, neighborhoods of varying levels of affluence, and the ruins of Tipu Sultan’s birthplace. Tipu Sultan is often called the Tiger of Mysore and was an 18th century ruler of Southern India, most famous for his determined resistance to English rule in the Anglo-Indian wars.

Tipu Fort is high up on a hill at nearly 5000 ft with commanding views of the whole region. The narrow, shoulderless road up the hill is a series of abrupt switchbacks with a fair amount of traffic going in both directions. It was definitely a moment for trust because we had no control at all. Happily, we were distracted by all the monkeys along the way. Melissa (who had not yet seen any monkeys) was delighted, but repeatedly admonished by the driver, saying, “Monkeys are dangerous. Caution!” We promised to be careful.

We had read that tickets would cost 15 rupees for Indians and 200 rupees for foreigners, but when we got to the front of the line, we were asked for 10 rupees each and an additional 50 rupees for a camera. That brought the total to just over a dollar for the two of us, which frankly didn’t seem like enough. Near the entrance, a vendor was selling ice cream, and a couple of the kids got some. This triggered the only trauma of the day when 10-year-old Ainsley’s ice cream was stolen out of her hand by a bold monkey. Monkeys were everywhere throughout the day, and it was so fun to see them, especially the babies (although we protected food carefully after that).

After passing through a gate, we headed up a long path with very little idea of where we were going or what we would see. It is strangely difficult to get specific information about Indian sites. We’re used to going on-line and carefully researching the things we want to see. In other countries. we can usually find someone’s carefully curated walking tour with points of interest and historical fact, but not here in India. There will be plenty of guidance about the importance of going to a particular place and maybe a couple specifics (a number of people recommended going to Tipu Fort for sunrise, a suggestion reiterated by our driver), but the majority of details just aren’t written down.

As we walked around the grounds, there were signs in English with clearly stated rules, but all other informational signs were in Kannada, so we were in the dark. There was one big sign that listed the points of interest in both English and Kannada, so we knew some of what we were looking for. From there, we just wandered and took in what we could. It had been suggested by one of Tom’s colleagues that we should hire a guide for the day – we decided not to because we were putting it together at the last minute and it was going to be a bit pricey, but we’d like to go back at some point with a guide who can offer more context. 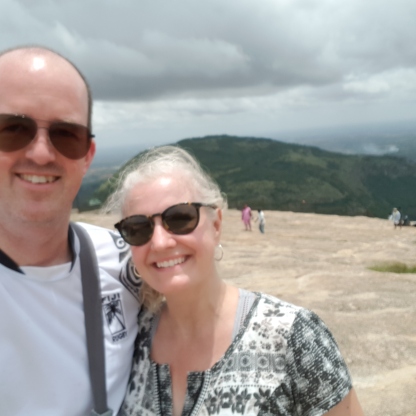 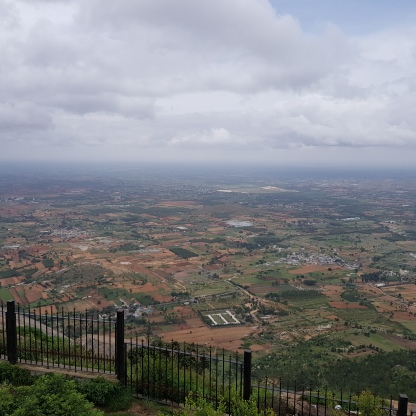 At the highest point of the hill is the Yoga Nandeeshwara Swamy Temple. We thought this

would be an old relic that was mostly a tourist destination now, but it really isn’t. Sure, there may be some tourists, but it is an active temple and place of worship. No photos can be taken inside and it really felt solemn and lovely. There is a priest in just an orange lungi lighting incense which people line up to wave over their faces while walking slowly past the idols. We’re not yet sure what’s appropriate for us. We know it would be inappropriate to visit a Catholic church and take communion when we don’t believe – does it naturally follow that it would be inappropriate to stand in line for incense waving? Or is that more appropriate than standing aside to observe? We’ll find out and be more confident in our actions next time.

After quite a bit more wandering and marveling at the natural beauty, the old ruins, and the adorable monkeys, we headed back to find our drivers who were waiting for us in

their cars. From there, we told our driver that we wanted to go to the Bhoga Nandishwara Temple, and he said he’d take us there but insisted on going somewhere else first. We didn’t really understand what he wanted to do or why but decided to just trust him – boy, were we glad we did! He took us to a temple that hadn’t been on

our list but was truly magnificent with idols in alcoves and a giant bull statue inside. Worshippers were walking slowly around it, and we joined them. Our driver told us (we think) that it started small 1000 years ago and has slowly been added to over time. So far we haven’t been able to find it on line, but we’ll keep trying because we’d like to be able to take people there in the future.

Then we went to Bhoga Nandishwara Temple, which is really a large walled complex with a beautiful park on one side and a temple on the other. It was built in the 9th century, dedicated to Shiva, and is covered with beautiful carvings and idols. On the park side people picnic and relax on the lawn. On the temple side, they are clearly there to worship. It is truly awe-inspiring.

After about an hour there, we headed back to our drivers and back home, arriving a little before 5. We set out a spread that included imported cheeses (smoked gouda, kerrygold, and brie), dips (unappealingly grainy hummus, tasty peri peri garlic dip, and herb dip), crackers, masala potato puffs, onion potato puffs, veggies, cashews, and our own papad and onion bajji (which were quite tasty if we do say so ourselves). The grown-ups came over but left the kids to relax at their respective homes with their screens – it had been a big day.

We also put out 4 bottles of wine for tasting and ranked them as a group: the clear winner was Grover Zampa La Reserve, followed by Fratelli Cab Franc/Shiraz. There was some dispute about which came in last, MS Sangiovese/Cab Franc/Syrah or Raya Red Wine, but we all agreed that they were all drinkable even if not all our favorites. Nice to know we can get a good bottle of wine for $15, decent bottle of wine for $11, and a drinkable bottle for less than $7. We’ll do ok 😊

Most significantly, it was really nice to have an evening to hang out and chat with new friends. We look forward to many more such evenings!