After a couple failed attempts, we finally made it to Druid Garden. Our expectations were overly high. Shane (Tom’s Head of School) intended to send us there for our anniversary (it was closed so we ended up at Saffron instead), and everybody seems to indicate it is their go-to for a nice, festive night out. In fact, Tom’s colleagues had been the night before, and one of them, Ivana, was very excited for us to try the Vietnamese salad rolls.

When we thought we were going there for our anniversary, while we were still in Portland, we looked at their menu on-line, so we already had a good idea about Druid Garden’s most notable characteristic: a multicultural breadth neither of us had ever seen. They serve Italian, American, Southeast Asian, Latin American, and Indian.

Despite the vast size of the place, it is really very warm. Though there is one large main space, there are a number of smaller, more intimate spaces, as well. We were seated in a secluded little section at a window overlooking the surrounding neighborhood of Sahakanagar, which was lovely, except that we were afraid we were forgotten. Melissa had a nice view of a very large TV, from which she got not only an intro to the ubiquitous cricket, but also an intro to kabaddi, a sport we had been told was basically full contact tag and is a very popular professional sport in India.

And then came the food. We went with a multinational spread: the Vietnamese spring rolls Ivana suggested; leak, corn, and emmenthaler empanadas; and a margherita pizza. We also had their own IPA. 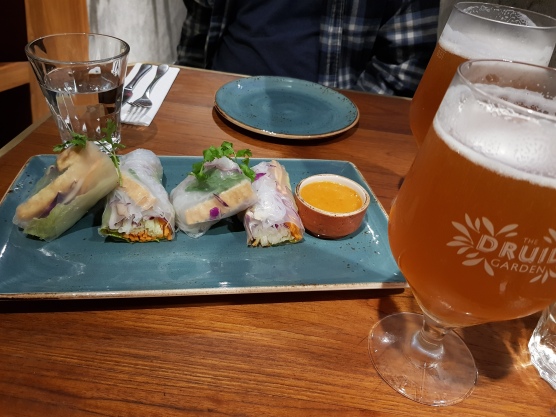 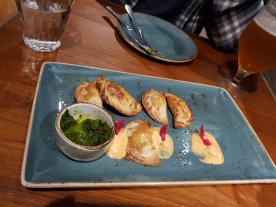 All of it was good, if unremarkable. We will return for the festive, friendly environment and the reliably decent food, but won’t again anticipate a fine dining experience.