After the big bonanza of activity last weekend, we decided that this weekend it would be nice to slow. it. down. And so we did.

On Friday, we had a lovely lazy morning, enjoying our newly delivered furniture. It’s so nice to take some steps toward making this feel like an actual home.

When we’d had enough of the apartment, we headed for Angsana Spa and Resort.

We were told that Angsana is only about 10 minutes north of us and has nice grounds and good restaurants that welcome lounging. That all sounded pretty great to us, so we

Lovely view for the afternoon. Note the bird in the upper left!

packed up some books and called an Ola. Ten minutes turned into a very long half hour when we came across construction that shut down half of the road. Kind of a bummer, but we were undeterred. Angsana itself looks like it’s seen better days – it could definitely use some paint and some pruning. The pool, though, is beautiful. If we’d been there to swim, we would have been delighted.

The first restaurant we checked out was lovely but closed. The second offered a tired looking buffet. The third was a charm – a deck with comfy wicker chairs and tables that we had all to ourselves. With a bottle of wine and a snack of cheese chili toast, we were happy to spend a couple hours watching the active birdlife in between reading.

The relaxation was a bit undone when we got home to a stuffy apartment without electricity. Power outages here are not uncommon – they happen multiple times a day, sometimes multiple times an hour – but usually last for just a minute or three before the generator kicks in and makes the essential ceiling fans start to rotate again. We could tell that there’d been no electricity for a while because the back-up battery on our UPS (uninterrupted power supply) which protects the wifi was fully drained. We asked a friend if her power was out and she responded, “Did you pay your electric bill?” Oops. It seems the receipt-looking thing in the mailbox did not belong to the previous tenant, but was actually our responsibility, and here in India, there are no warnings or second chances. Luckily, Tom was able to go downstairs to the maintenance office and learn how to pay online, a half hour after which our power would be restored. An hour later, he went to check on progress, and the nice guy in the office looked at the online receipts for payment and flipped the magical switch. Whew! That’s a mistake we’ll try not to repeat. New mistakes every day, right?

On Saturday morning, we continued our pokey pace, but headed out late morning to go to Pottery Town. It’s not actually a town, but a section of Bangalore where potters have lived for generations with each generation learning the craft from the previous. It’s small – just the streets around a single intersection – but each home has pottery arrayed in front or just inside for people to view and buy. Many of them have elaborate Ganesha statues arranged and apparently this neighborhood supplies vast numbers of the figures for the annual Ganesha Chaturthi celebrations. Our mission, though, was to find simple pots for for an herb garden on our kitchen deck and a vase to hold some peacock feathers in the living room, which we happily did. 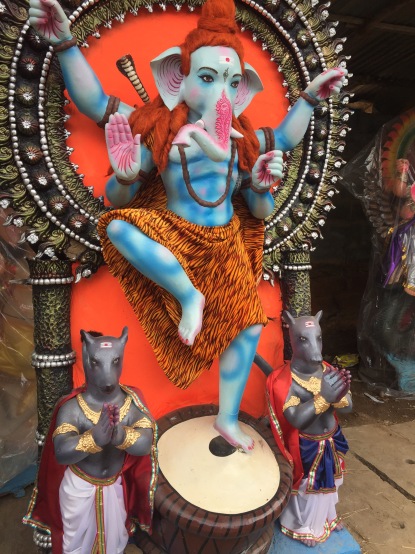 We had a three day weekend because it was Eid al-Adha, a Muslim holiday which focuses on family and sharing one’s bounty. Part of the holiday comes straight from Abraham. The story goes that God was testing Abraham and ordered him to offer up his son as a sacrifice. When it was clear Abraham was going to obey, God told him to stop and sacrifice a ram instead. Today, Muslims on Eid al-Adha do the same — they kill a sheep (around here it seems to be goats), and the family eats some of the meat and gives away the rest to neighbors and the needy. How this affects us is that on our travels, we kept coming across large herds of goats waiting to be, let’s say, sanctified. Some friends who made the same trip a couple of hours later had very different and disturbing experience.

From there, we got back in Anand’s car (Anand was our charming driver for the day, supplied by Madesh) and headed to the Jayamahal Palace Heritage Hotel. The Jayamahal Palace was once the home of Mysore royalty but is now an historic but middle-of-the-road hotel. We were there for a late lunch at the lovely garden restaurant, but the downpour kept us comfortably situated in the big wicker chairs on the covered deck. We always feel like we’re doing something right when we aren’t surrounded by white tourists, so this was certainly successful in that regard.

On Sunday, we explored the edges of our comfort zone. For brunch we went to the Mavalli Tiffin Room (read a complete review here) and could not have been more delighted by our choice. The experience was enhanced by the community tables which meant that we were joined by Nagesh, whose family was seated at the next table. He made sure that we ordered all of the best things and ate them properly. 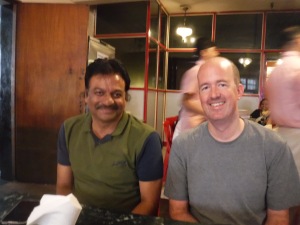 Entirely satisfied by our phenomenal (and very affordable) meal, we started the walk to the KR Market. We were emboldened by our wonderful experience the previous weekend and certain that we would enjoy our weekly shopping experience. The reality was a little different. We approached from a different direction this time and ended up walking down a long, muddy road lined with loading docks and frequented by lots of honking trucks. It wasn’t super pleasant, but we weren’t quite sure how to get out of the maze of streets and onto a better path. Eventually, we got where we wanted to be with much relief. Just outside the archway of the market, we successfully bought pasta without the use of

language beyond a number, eventually figuring out that we had to first give him the money and then he would weigh and package the pasta. We then moved onto the fruits and nuts lady, who was very disappointed that we were only purchasing cashews. We were disappointed that the cashews weren’t much cheaper than the packaged ones in the store. We were even more disappointed that we allowed ourselves to be bullied into eating yucky raisins that we didn’t want to sample.

Passing through the archway, we were surrounded by a vibrant cacophony of vegetable sellers calling out their wares. We wanted to walk through and see everything before deciding what we’d buy to put into that night’s pasta sauce. We also wanted to wander through the floors of the market building in search of peacock feathers for our pretty new vase. The market wandering got confusing – as we got a bit lost, it became increasingly difficult to tell whether we’d been somewhere before, and increasingly more evident that there were no peacock feathers for sale. We knew we’d seen some the previous week so had a hard time giving up the search, but we finally admitted defeat when it really just wasn’t fun to look anymore. The combination of smells and chaos were simply overwhelming. Back outside in search of vegetables, we acquired cauliflower, carrots, onions, garlic, and tomatoes, but no peppers or herbs other than mint, cilantro, and curry leaves – time to start an herb garden! We also bought a big pasta pot which should come in very handy.

The truly challenging part of the escapade was the walk home. Surrounding the market, there were so many people, so many cars, so many motorbikes, so many trucks. There were also so many puddles, mudpits, and other fecal-related hazards. We needed to find a place from which to call an Ola home so had to find a quieter area, but we just couldn’t seem to get out of this crazy overwhelming maze. We wandered down one street with an unbearably foul odor, Tom stepped in a horrifying black puddle up to his ankle, and our patience was wearing thin. There was a bright spot, though, when Tom spotted someone across the street waving peacock feathers over his head. We bargained him down to half the ridiculous price he was asking, and clearly still paid too much, but were glad to go home with them. Finally we found a quiet alley with a little hotel at the end of it and called an Ola home. Back home, we unloaded our bounty and scrubbed our feet and shoes. Next time, we’ll plan our escape route a bit better. Still, we were proud, if also overwhelmed and exhausted.

4 thoughts on “Chapter 9: Taking it Slow”